Wrap Up // The Mellow Mid Year

Hey there folks! It's just past the middle of the year (this will be published a little later, I think) but I thought I would do my own little take on the Mid Year Book Freak Out Tag. I'm not doing it in question order and only choosing the categories I want to do but as I haven't been doing monthly wrap ups (something I want to change), this was a great way to share the most stand out books I've read so far. Without further ado, here is my wrap up!

So far this year (from 17th July when this is written) I have read 40 books out of a goal of 50. I will probably increase this goal to 65 in the very near future. One accomplishment I'm quite proud of is the fact I've completed 4 series! You can check out a whole run down of the series I've completed by clicking the tab at the top of the page!

Best Book
I've already had quite a few 5 star reads this year so it's hard to narrow down which one is my absolute favourite. I think I'm going to have to say that The Gracekeepers is my favourite book of the year so far just because of the beautiful writing and mystical story telling. I read this off of the recommendation of Jen Campbell (booktuber and author extraordinaire) and I must say, all of Jen's recommendations have led to at least 4 star ratings. This book in particular is whimsical and reminded me of The Night Circus in some aspects. I highly enjoyed this and would recommend it to anyone who wants to read something a bit more magical than normal.

Best Sequel
As I previously mentioned, I've finished a few series so I have a lot of choice! However, one of the sequels I read was How Hard Can Love Be? by Holly Bourne, my favourite author, and another was A Clash of Kings which is quite hard to beat. I'm going to call it a draw between these two wonderful books. Both are vastly different and I enjoyed them for different reasons so I don't feel I could directly compare them anyway. Bourne's second installment in the Normal Series is an adventure as the main character takes America by storm and finds love whilst talking about feminism with her best friends. Meanwhile, Martin's sequel to A Game of Thrones continues to develop the plot and keep you engaged, despite the massive size.

Biggest Disappointment
Unfortunately, this one isn't hard to choose. Obsidian by Jennifer L. Armentrout has been recommended time and time again, but it did not live up to any of the hype by any means. I disliked the characters and the plot so the only redeemable quality was the writing. I'd been assured that this was an "addictive" read yet i struggled to read it and was counting down the page numbers, wishing they'd decrease at a faster rate. I won't be continuing on with the series but I hope I can find an Armentrout book that I can enjoy!

Biggest Surprise
I know I keep talking about Holly Bourne, but her book The Manifesto on How to be Interesting was a genuine surprise to me. I'd already read the first two books in the Normal Series and adored them, so I was sceptical to try anything else by Bourne in case the Normal Series were the only books I actually enjoyed of hers. Boy, was I wrong. I've never been more pleasantly surprised by a stand alone and the fact that this book had many Mean Girls elements in it made it all the more enjoyable. I think this is a great book to read and deserves much more hype on Booktube!

Favourite New Author
As I discovered Holly Bourne last year, she doesn't qualify for this so don't worry about anymore gushing about how much I love her! Instead, I think George R. R. Martin takes this title. Sure, I'd been a fan of the show for a while but I didn't really think the books could live up to their own hype. Quite strange considering I'm normally a firm believer that the source material is usually better than the adaptation. Therefore, I was thrilled when I started reading the series and discovered that not only were these books really accessible, but the writing and storytelling flowed really well! The multiple POVs didn't jar me and I think having it in third person really helped with that. I can't wait to read the rest of the series!

Most Beautiful Book
One of my most recent purchases was Othello by William Shakespeare in the beautiful 2005 Penguin Shakespeare editions. I love the whole drawing on each of the covers in this series, and I'm so sad that they're out of print and that I have to buy them second hand! Luckily I've already got Much Ado and Romeo and Juliet in these editions. They're also really small which means they're great for putting in bags and carrying around with you! 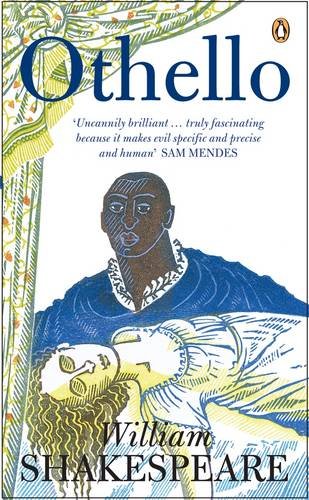 Books I Need to Read This Year
Funnily enough, I have a whole blog post dedicated to this coming out in the next week or two. It's going to be an update on my Book Bucket List for the year and how many of the books I've actually read!

What's been your favourite book to read so far this year?